Does public space shape a democratic, peaceful and healthy society?

Irina Kolegova
MPhil in Sociology and Demography, University of Oxford
Correspondence to irina.kolegova@stcatz.ox.ac.uk

BACKGROUND
The principles and importance of public urban space have often been considered to be a stabilising force for managing the ‘good’ and generating ‘healthy’ societies – a way of measuring how government institutions conduct public affairs, and manage public resources in a democratic way. The COVID-19 crisis has highlighted the importance of sharing access to public spaces, and the role of these places in urban society. Over the last decades, there has been an increasing interest in how the physical space of streets, squares, and avenues might be associated with architectural plurality, political achievements, and places where public life is manifested. This report debares the role of public spaces in shaping a democratic and peaceful, and arguably ‘healthy’ society.

FROM POLITICAL PLURALISM TO ARCHITECTURAL PLURALITY
One of the key characteristics of democracy is pluralism. Pluralism, in political science, refers to the view that in liberal democracies power is dispersed among a variety of economic and ideological pressure groups, and is not held by a single elite, or group of elites. However, p could be considered not only as the aggregation of citizens’ interests through diverse political parties and interest groups, but also as a diversity of views, a plurality of lifestyles, of beliefs, which are often expressed through architectural styles and urban design. In Architecture: choice or fate (1998), architect Léon Krier demonstrates an association between political pluralism and architectural plurality, claiming that a variety of urban and architectural visions can be guided to produce an inclusive diversity of towns and villages with very different structures, organisation, architecture and density, each with its own unity, harmony and specificity.

Architectural plurality assumes that there cannot be a single architectural , but it does not necessarily mean a confusion of urban forms. When architecture styles are mixed up, there is arguably limited possibility of choice, or as Krier implies, false or ‘fake’ pluralism (Figure 1). Conversely, ‘true’ plurality implies a respect for differences, freedom and fundamental choice. The diversity of urban and architectural visions may therefore be seen as a reflection of political views. 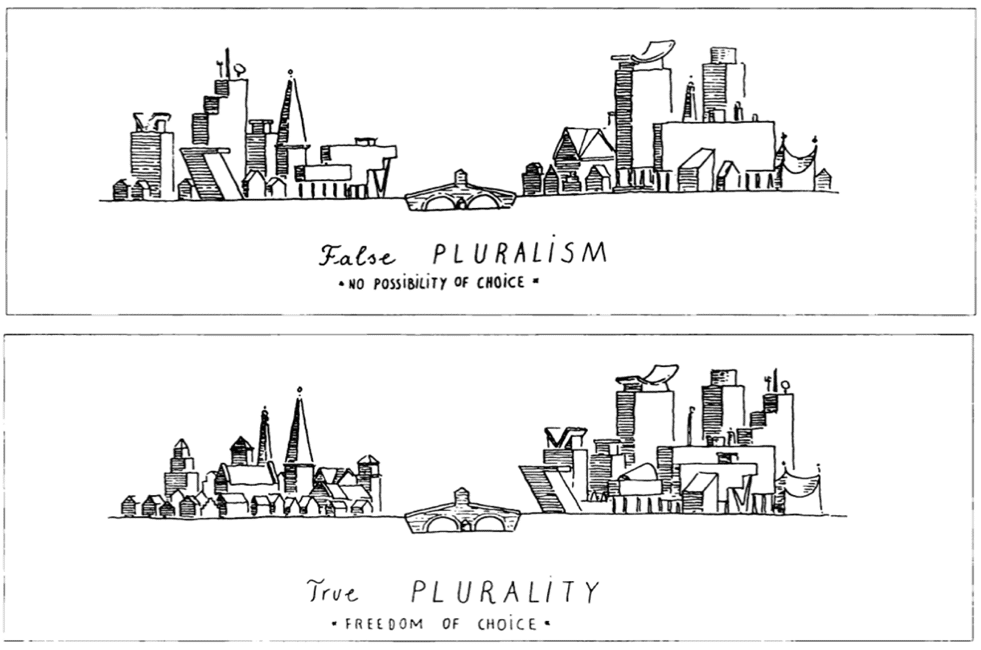 PUBLIC SPACES AS SPACES FOR POLITICAL ACHIEVEMENT
Over the last few decade, architects, urban planners and designers, researchers, and policymakers have transformed their perspectives on how public urban space is appropriated by the population. The square, or plaza, as one of the most common forms of a public space holds a central role in the democratic concept. Each square has its unique combination of symbols and history; they are used in different ways by different people, and often have distinct physical characteristics. When people first began to settle in cities, the town square was also the natural gathering spot – a place where people debated, made policies, and decided on a course of action (such as, the ancient Greek agora, medieval Scandinavian ting, and Slavic vecha). The majority of decision-making has shifted away from the town hall and into wider government structures, with squares being used for other activities, such as demonstrations, entertainment, or celebration (Figure 2). 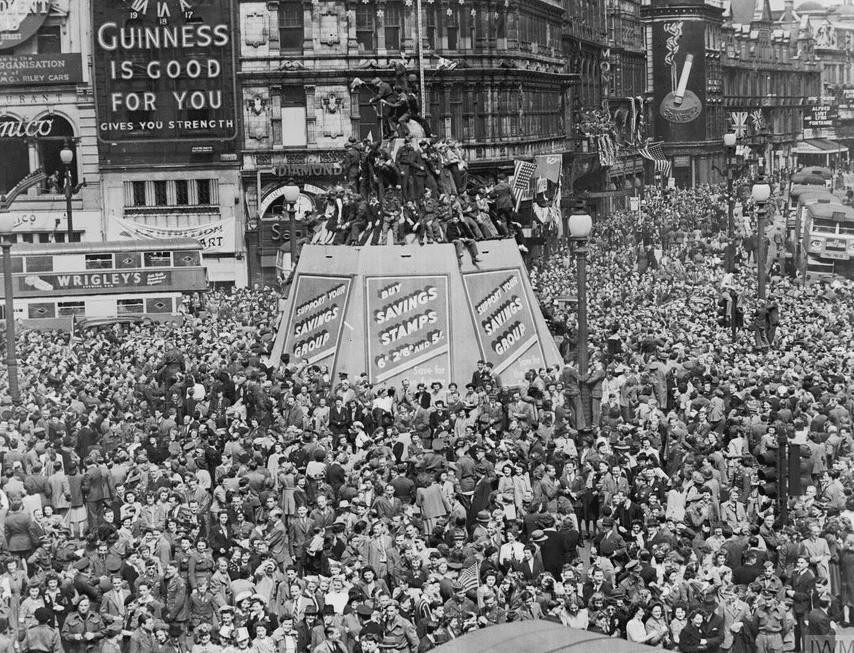 People often challenge a city square’s original intent. Physical space tends to be a space of political realisation, which takes the form of demonstration, protest or even revolution. Such political expression often occurs when urbanism, society at large, ceases to reflect civic practices and shared interests. Social demonstrations use the streets, squares and avenues of cities as their stage. Public space might be considered as a social space of struggles (social movements), and for party political forms of expression (establishing new political parties, or alternative economic and social policies).

For example, most of the demonstrations organised by the Free Transport Pass Movement during 2013 and 2014 in São Paulo, Brazil, occurred in the central south-west region of the old-city centre (Figure 3). Protestors gathered on Avenida Paulist, the city’s most famous . Demonstrations were held against planned increases in public transport fares, which were necessary to ensure “workers’ access to the wealth of urban space”. Having taken over the streets during the demonstrations, people shifted control of fare policy from the city to themselves, with the result that the government cancelled planned increases in public transport: buses, subways and trains. 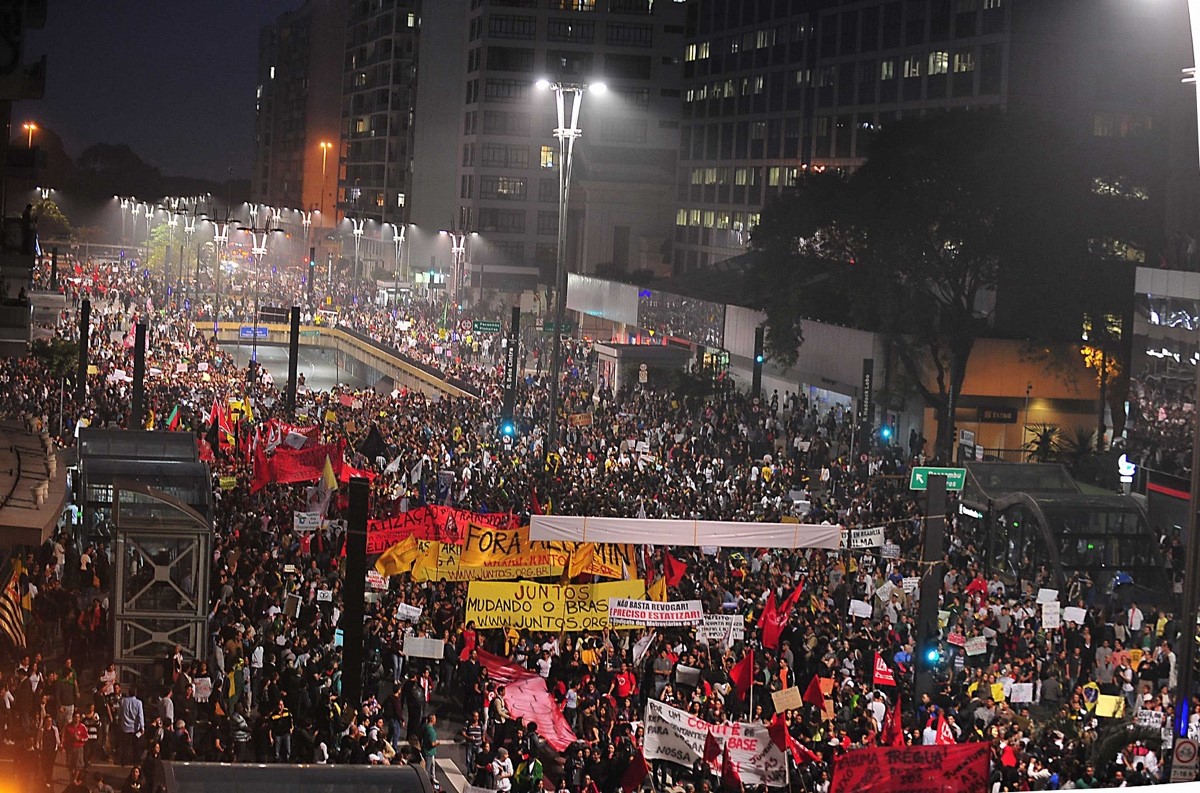 But why did these protests take place within this area, and not in other regions of the city? The characteristics of each place chosen to stage the demonstrations are important, and the physical and social re-engineering along with territorial organisation of these places were not accidental. It was into the south-west sector of São Paulo where historically, the vast majority of its . Until the 1960s, the centre of São Paulo was the exclusive domain of this social minority, and the heart of the city still retains a great affective, cultural, and symbolic value for the majority of the population.

URBAN PUBLIC SPACES: A SOCIO-ECONOMIC PERSPECTIVE
Democracy has been also considered as a way of life and ethical association in many societies. From this perspective, public spaces represent the public sphere, and where everyday life is manifested. Access to walkable and wheelable urban public spaces influences standards of urban living and social relations. Also, some scholars have revealed a positive association between individual assessments of neighbourhood walk- and wheel-ability, and various aspects of social capital, including promoting neighbourly engagement, political participation, trust, and positive social interaction.

If people live in a car-dependent suburb, it is likely that they have less time to participate in community activities, or to engage socially with neighbours. Often, there are either no pavements or poorly connected pathways in contemporary suburbs. In contrast, residents in less car-dependent neighbourhoods have a greater sense of community, and a greater likelihood to walk in their local area than resdients in modern suburban neighborhoods.

Conversely, a number of studies reported no significant difference in mortality between social interaction, and sense of community. These studies find that people do not necessarily interact more, or feel more sense of community in the traditional neighbourhoods than in the conventional suburbs, and that suburban population homogeneity can fosters a stronger sense of community. Nevetheless, the significance of having access to communal, and safe, outdoor public spaces has been emphasised by the current global pandemic, raising the social and political significance of a shared urban realm.

AUTHOR
Irina Kolegova is pursuing an MPhil in Sociology and Demography at the University of Oxford. She holds a Bachelor of Arts in Sociology from the Higher School of Economics, and calls Moscow home.