Face coverings, self-surveillance and social conformity in a time of Covid-19: a pilot study of public compliance with municipal rules requiring face masks to be worn in public spaces in Brittany, France

While there is evidence for the efficacy of masks in slowing transmission, and studies on the psychology of conformity to regulations requiring mask-wearing, few if any studies have appeared examining compliance with mask wearing regulations at a local level. Such work can provide baseline data from which explorations into motivations and potential influence of spatial factors can then be considered from the scale of the face outward to that of whole places. Masked faces offer a new kind of micro landscape for individuals through which they are required to actively demonstrate social conformity to acceptable behaviour and perform both Foucauldian self-surveillance and the surveillance of others’ civility to manage that landscape.

Accordingly, this paper presents an initial examination of mask wearing in the municipality of Saint-Malo in France, asking the following questions: What are people doing about mask wearing? How are they negotiating these new micro landscapes of health and conformity? What might be motivating behaviours which seem to reject a need for shared action in this space? Reflexively, given the cogent evidence of the need to increase uptake of mask wearing what interventions might assist in changing social norms to make mask wearing socially acceptable and non-compliance (unless for other health reasons) unacceptable?

FIELDWORK LOCATION AND RESEARCH METHODS
The site chosen was the small walled city of Saint-Malo on the north coast of Brittany, very popular with tourists from Paris, to which it is now linked by direct high speed rail services. Despite the city having been very largely destroyed in 1944 and reconstructed thereafter, it retains its traditional scale and remains a very popular destination, with enclosed streets thronged with day trippers and those staying longer. This makes it a good case study for mask compliance as its population consists of a mix of visitors and local residents in large numbers within a constrained series of spaces. The wearing of face coverings within the historic centre (Intra-Muros) and enclosing ramparts was made compulsory from 30th July 2020. 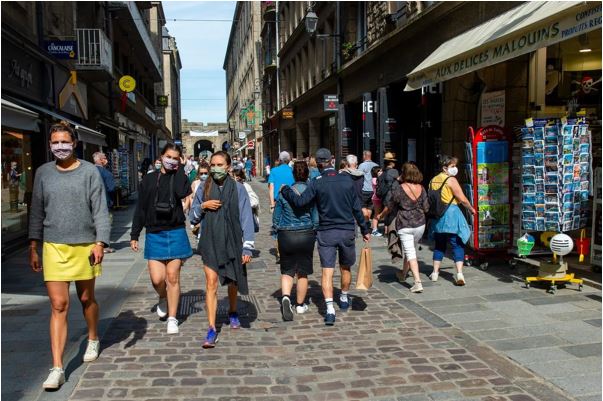 We chose a mixed methods approach combining non-participant observation of mask wearing among the population passing a series of visual gateways, together with observation of mask wearing among groups of friends and families passing by. We conducted two counts of 30 minutes at lunch time at the same location on separate days, one a weekend day and the other a weekday, noting mask-wearing and non-mask wearing behaviours. Results were tabulated on the two separate days and totalled in the tables below. On the first day we recorded mask wearing for adults and children. On the second day of recording, we separated men and women as we had observed some differences during the first day and decided to explore these more closely. On the second day, to simplify recording, we did not record mask-wearing among the under-11s, for whom it is not compulsory.

The location chosen was off the main street and its cross streets, in an area with bars, cafes and restaurants, on one of the routes to the beaches which surround the city. The observation point was thus a kind of edge space between city and beach. This was selected as the main streets were judged too busy to make an accurate count, even with two observers. The off-centre location we also hoped might offer a more nuanced result as we expected there to be less expectation of official surveillance, including the possibility of being fined for non-compliance, out of the main public traffic flow, and thus, a more accurate representation of self-surveillance. 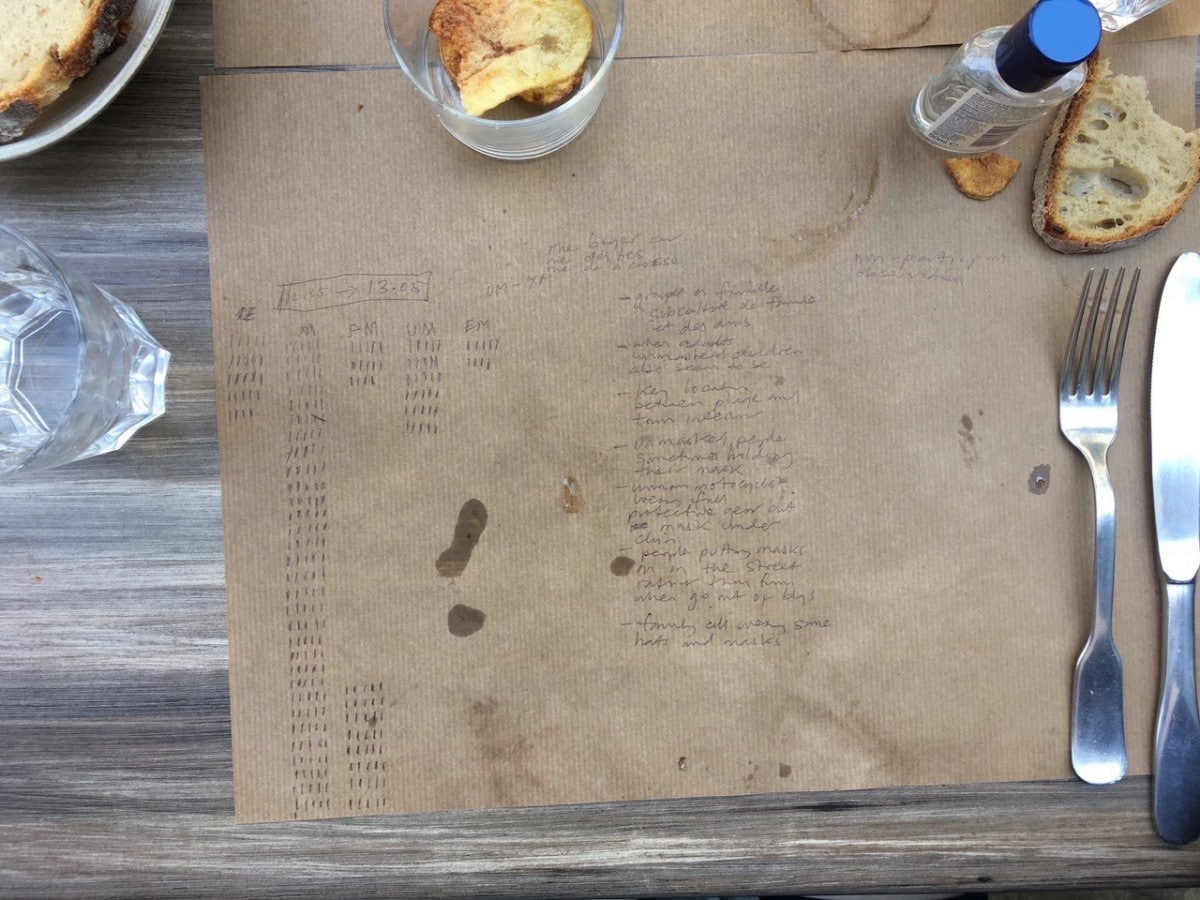 FINDINGS
On Day 1 (Sunday) over a 30 minute period we observed a total of 273 individuals, including 240 adults and 33 children:

The findings from day one’s observations of some 273 people showed that almost 82% of adults were complying with masking requirements and just over 18% were not, with the latter split between 12.5% unmasked and 5.8% semi masked. Among children the mask wearing proportion was lower with 27.3% masked and 72.7% unmasked, in line with the requirement that only those 11+ are masked but also raising points noted in the discussion below.

The day two observations of 218 people captured fewer observations overall suggesting a somewhat lower number of visitors on a weekday than the weekend. These observations also demonstrated a lower level of compliance than on the weekend day, with some 74.3% of all adults wearing masks and around 25.7% either unmasked (16%) or semi-masked (9.7%). The gender split explored on day two showed a slightly higher level of compliance among women (76.9%) than men (71.3%) in the fully masked category, yet slightly more women than men were completely unmasked. A somewhat higher number of men than women were semi masked. 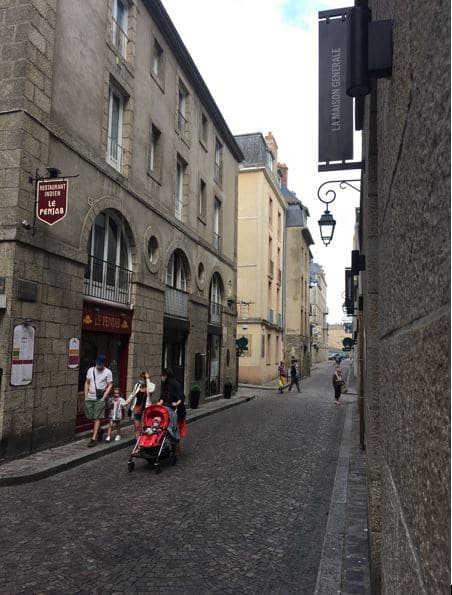 DISCUSSION AND ANALYSIS
The data from the weekend observations appeared to show reasonably widespread compliance with masking requirements, of around four in five adults being fully masked, but this dropped somewhat on the weekday observation when fewer people were in the streets and compliance dropped to three in four persons being fully masked. One possibility is that compliance is not seen by the non-complying individuals as so necessary, or so likely to be observed by others, and these judgements alter their behaviours.

Literature and accounts elsewhere have made clear that for some individuals there are both visible and hidden disabilities making mask wearing problematic. The observations did not show any obvious signs of these with compliance and non-compliance apparently spread across ages, genders, and ethnicities in no discernible pattern.

The observations seemed to show social group conformity norms in evidence. It appeared that many family groups ‘do the same thing’ when it comes to their masking behaviour. In some cases, the whole family were observed to be wearing masks properly, well fitted over both mouth and nose. Where this was the case it was also observed that the children wearing masks seemed to be doing so at a younger age than in families where adult mask wearing was more partial or absent altogether.

Those who were semi-masked performed this in different ways. The preponderance of those who were semi-masked wore their mask over their mouths but under their nose. Some wore their masks under their chin so over neither nose nor mouth. Where some members of family groups were unmasked in this way, others within the group appeared more likely to be semi-masked (under the nose), implying a sense of social permission to ignore or modify mask  wearing requirements and to fit instead with group norms.

A few examples were observed where individuals in a group were fully masked and others were unmasked (no mask in evidence) and this often seemed to be the case for couples where the woman was masked, and the man unmasked and speaking. A number of people were observed with their masks ‘symbolically’ present but worn only under their chins or as a kind of bracelet over an arm, rendering them useless in practical terms, but still close to their face or on their body and thus offering a kind of appearance of conformity. It opened up intriguing speculative thoughts about whether such individuals felt they were conforming in some sense, despite not actually wearing a mask in any protective way.

In an echo of Gill Valentine’s work on the ‘indulgent street’ which explores changing and increasingly indulgent attitudes towards eating in the street, some of those who were unmasked were eating, speaking, smoking or speaking on mobile phones as they walked along. In these cases, they were undertaking activities incompatible with mask wearing or judged to be so. Of course, speaking to others who are present or on the phone can be done while wearing a mask and again opens up interesting areas for further exploration on attitudes and behaviours.

The observations also raised spatial points. A number of people were observed putting their masks on as they walked along rather than before they left a building such as a restaurant or hotel doorway. This appeared analogous to the behaviour of putting on a car seat belt after starting to drive rather than before moving, and again we speculate as to whether a similar psychology is at play here.

Some spatial factors seemed to be in evidence. The observation point was near the edge of the walled town area where streets lead to the various beaches along the western side of the town. It appeared that some of the non- or semi-masked individuals and groups were making their way in from the beach and had deemed that there was some point within the town when it was most appropriate to don their masks rather than at the town wall as required by law.

CONCLUSIONS AND FUTURE RESEARCH
As can be seen from this data, non-participant observation raises some interesting findings and opens a range of areas for discussion and analysis in relation to the new micro landscape of face masks. Our work suggests that uptake has been rapid and reasonably high across a diverse demography. Age, gender and apparent class position seem far less important in determining compliance than do the social norms of family and friendship groups. Individuals appear to be undertaking self-surveillance to ensure they are conforming to new social norms. Equally the surveillance of others within a social space of town streets may be reinforcing the way that mask wearing has rapidly become the new normal in France. In the absence of any legal enforcement (none was seen during the study period), this seems to be evidenced in the way a considerable proportion of the minority who wish to avoid wearing a mask appear to feel a need to appear to do so – if only symbolically or partially – while numbers openly flouting the law on wearing masks at all are low to very low.

Clearly there are limitations in how far the motivations leading to face mask compliance and non-compliance can be understood can be explored within this data set. Further qualitative research, such as semi structured interviews with individuals, to tease out perspectives leading to particular behaviours would be valuable to help understand these self-surveillance and social conformity factors.

Increasing mask wearing uptake may be crucial as part of the successful response to the COVID-19 pandemic so more understanding of the social world of the face mask is important as part of supporting that response.

Associate Professor Susan Parham is Head of Urbanism & Planning at the University of Hertfordshire. Susan is the Academic Director of the International Garden Cities Institute (IGCI) at the Letchworth Garden City Heritage Foundation and Director of the University of Hertfordshire Urbanism Unit (UHUU). Her particular research interests include everyday urbanism, the urbanism of Garden Cities and New Towns, food and spatial design, sprawl retrofitting and transport oriented, compact and sustainable cities.

Dr Matthew Hardy is Senior Lecturer in Architecture & Urbanism at The Prince’s Foundation, a Senior Associate Tutor in the Department for Continuing Education at the University of Oxford, and co-founder and co-editor of the Journal of Urbanism. He worked to establish the International Network for Traditional Building, Architecture & Urbanism from 2000-2010 and has lectured and published widely, including The Venice Charter Revisited: modernism, conservation & tradition in the 21st century (2011).